A Refurbished ISIS in the Philippines 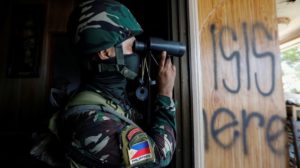 Terrorism is a global challenge, and every country is vulnerable to it. While the world is consumed by the coronavirus pandemic (COVID-19), numerous terrorist and insurgent groups have taken advantage of the uncertainty. The coronavirus has given a boost to ISIS propaganda efforts, which portray the disease as ‘Allah’s vengeance’ for anything from killing Abu Bakr al-Baghdadi, former leader of the group to other hits that the group has taken. The foreign fighter-backed jihadist invasion brought the southern Philippines on the map of global terrorism, killing 1,100 and displacing more than 350,000 people, 127,865 of whom are now displaced according to the UNHCR. The Philippines has experienced terrorism for more or less 44 years, beginning on 7 April 1976 when three members of the Moro National Liberation Front (MNLF) hijacked a Philippine Airlines jetliner BAC-111 from Southern Philippines and ordered it to fly to Libya. It cannot be denied that the Philippines, mainly the southern part of the country where the Maute Group, also known as the Islamic State of Lanao, and the Abu Sayyaf Group (ASG), then linked to the international terrorist organization, Al-Qaeda and now the Islamic State, has long been a haven of terrorist activity. Philippine security forces deployed in Mindanao have been fighting on several fronts since February 2020: Muslim militant groups allied with ISIS, communist rebels and the unseen threat of COVID-19.

Connection of Abu Sayyaf and the Islamic State

Abu Sayyaf was founded in the early 1990s by Islamist preacher Abdurajak Abubakar Janjalani to counter the Moro peace process on Mindanao, the largest island in the southern Philippines. Two larger Muslim insurgent groups, the Moro Islamic Liberation Front and the Moro National Liberation Front, laid down their weapons in pursuit of dialogue with Manila something that Abu Sayyaf rejected outright. Nominally fighting for independence in the region, Abu Sayyaf became famous for terrorist attacks, abductions and beheadings. Its senior leader, Isnilon Hapilon, pledged allegiance to the Islamic State in 2014 shortly after the jihadist group overran Iraq and Syria’s large areas. In the final days of the siege in October 2017, Hapilon was killed in a gunfight with Philippine troops; his ISIS-aligned battalions had been defeated. The ties between Abu Sayyaf and the Islamic State seemed to weaken after Marawi, as Abu Sayyaf retreated to his regular hideouts on the outer Philippine islands of Basilan, Sulu and Tawi-Tawi. The remaining members, already fragmented, resorted to their former illegal activities, such as extortion and sea kidnappings. At the same time, the Islamic State in Iraq and Syria experienced drastic territorial defeats that limited its ability to sustain support for its regional affiliates.

The ISIS group first made a major move for recruitment in 2016 in the south of the Philippines, circulating online videos beckoning militants who could not fly to their self-proclaimed caliphate in Iraq and Syria. The following year, in Mindanao, rebels who had pledged allegiance to the Islamic State took over Marawi region. By the time five months later the army prevailed, the country’s largest Muslim-majority city lay in ruins. The combat killed at least 900 insurgents, including foreign fighters and Isnilon Hapilon, the Islamic State’s East Asia emir. After the combat Mr Duterte, Philippine President proclaimed victory over the Islamic State. Yet his triumphalism has not dissuaded the loyalists from regrouping.

After four years of American-backed bombing and ground combat by Kurdish and Shiite militia fighters, the territory of the Islamic State in Iraq and Syria, once the size of Britain, shrunken. The basic ideology of the Islamic State did not go anywhere. The blasts from Indan are just the latest example of how it still pushes and encourages a new kind of militancy in the southern Philippines. Sawadjaan had been Abu Sayyaf’s most powerful faction and is thought to command several hundred fighters in Ajang Ajang. Sawadjaan has united its most radical elements in Sulu under the banner of the Islamic State. Another ISIS-aligned cell, headed by Furuji Indama, is their dominant branch on Basilan’s neighbouring island. The two traditional Abu Sayyaf strongholds on Sulu and Basilan are now essentially ISIS hotspots following the siege of Marawi. The Islamic State’s growing presence in the southern Philippines has drawn foreign fighters, as two Indonesian suicide bombers were behind the Jolo attack, and one Moroccan national was reportedly responsible for one of the Indanian blasts. Until now, even during a deadly pandemic, the country is being constantly tormented by the scourge of terrorist attacks. Three years after Islamic State-aligned militants seized Marawi’s southern Philippine capital, triggering a brutal five-month urban siege, violent extremism continues to thrive in the Covid-19 pandemic’s shadows. On April 17, 2020, 11 Filipino soldiers killed by ISIS fighters who were on a mission to hunt for Hatib Hajan Sawadjaan, the leader of the faction of the ISIS-linked Abu Sayyaf group, who succeeded the notorious Isnilon Hapilon. Similarly, six thousand Maguindanao residents had to leave their homes because of terrorist attacks on 27 May 2020. And on 5 June, in Sitio Lagaron in Barangay Kan-Ague, Patikul, Sulu, the Philippine Armed Forces lost four more soldiers while 17 others were injured in another military encounter with members of the Abu Sayyaf Group (ASG).

Although the army has been engaged in counterinsurgency in Sulu for three decades, the string of suicide bombings linked to the Islamic State this year may yet change the situation on the ground, adding urgency to Duterte ‘s strategy. A peace process on Mindanao with older Moro rebel groups, culminated in the historic development of a new self-governed region, also gives the government a breathing space to combat extremists. The deal is likely to serve as a dampener in the recruitment of terrorists, as the citizens have a chance for autonomy. In retrospect, there are still significant security issues facing the Philippines on many fronts. Militant groups take advantage of the outbreak of COVID-19 and are actively promoting violence and aggression against government forces and innocent civilians. Now more than ever, it is imperative for the government to respond effectively not only to the challenges raised by the COVID-19 virus but also to the country’s threats of terrorism. The government, therefore, has both the duty and the right to catechize counter-terrorism legislative measures that will protect the country’s national security and integrity, and protect its citizens from the brutal and ruthless effects of terrorism.

**The author is currently an intern in KIIPS. She is pursuing PhD as a Junior Research Fellow (JRF) in the Centre for Inner Asian Studies, School of International Studies in Jawaharlal Nehru University**