Banning of Chinese Apps in India: A Laudable Step 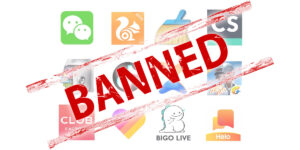 Our future is based on digitization and cyberspace. Since the past couple of decades, nearly all our day-to-day interactions have been highly influenced by technology. This phenomenon has increased exponentially during the pandemic. From hosting meetings, managing database, publishing, creating and many more jobs are now done right from electronic devices. This manyfold increase has also created digital employment opportunities, although way below the number of jobs loses due to the pandemic.

While the internet has proved to be a boon to human life in multiple areas, social media remains to be a topic of contention. Facebook, Instagram and many other social media giants are banned in China, while Tiktok, a Chinese app, is used by the youth across almost every country. This shows that China may have been trying to have its own global social media dominance.

The people of India have been encouraged to boycott Chinese developed apps and the Indian Government has recently banned over two hundred such apps. The reason behind this is that these apps being considered to be prejudicial to the sovereignty and integrity of our nation. In retrospect, the reason for the delay in this decision and the inability to foresee this event by the people of India is now being questioned.

What does digitization have to do with China being the absolute power?

The answer to this is very simple. Money will cease to be the centre of power for the upcoming generations. Instead, processing power would be the strongest and most precious asset one will possess and in times like these, will subsequently bring the rise of Data Mining; the process of lending one’s computing power for bigger organizations for their processing, rendering and many more tasks. In this process, the individuals are rewarded by a point-system which in some cases can even be in cryptocurrency like Bitcoins.

The importance of installing an Anti-Virus these days is not only important to prevent a virus attack, but also removing malicious applications which secretly perform Data-Mining from the system, without permission and heavily slow down the systems. Many people in India do not recognize this slowness in their system because they are misinformed, do not use their system for long hours and consider their system being slow because it’s old. This can be highly detrimental to the people who are required to work on a system round-the-clock due to their need for proper processing power.

Let us take an example of an app that is using a mobile device’s 10% processing power. For the sake of understanding this, let’s presume that hypothetically 10% = 260 Mhz (Megahertz). This 10% can now be multiplied by 4, which is the average processing power used by an app in a family which is almost 1.4 GHz. This now can be multiplied 323 Million times to get the number of downloads in India for the app – ‘Tiktok’. And this amount is roughly way more powerful than multiple supercomputers, even after considering the loss of data and other exceptions. This much power is being generated only in India, and calculating the amount generated in the entire world is not even possible. This puts into perspective what the apps in our mobile devices do while running in the background. Apps like Facebook and Whatsapp, continuously work very lightly to check on notifications and messages. But apps like Cleanmaster, Shareit etc. – which were recently banned by the Indian Government, still run in the background and generate advertisements and use processing power for unknown reasons. The Headquarters and servers for the apps are located in China, and if the apps are actually stealing processing power, we can now pretty much understand how much power China has just from the public. This brings us to an even more important fact about privacy. The privacy policy of a few such apps state, that they regularly collect – usage information, IP Address, Mobile Carrier, Unique Device Identifiers, Keystroke Patterns, Access to Camera, Location Data and Other Data, which is alarming enough, just by the mention of it.

Experts in this field opine that lack of appropriate action on the part of the government of various countries and with amassing of information by this nation could lead China to the become the most powerful country in terms of digital future across the globe.

**The author is interning as Graphic Designer with KIIPS**