France is ‘Back’ in the Indo-Pacific

France as an Indo–Pacific Power

Paris has a relatively strong military presence in the Indo-Pacific region. It has about 4,000 troops operating in the Indian Ocean, while in the Pacific – some 3,000 troops.[i] France’s commitment to the Indo-Pacific is a natural process for at least two reasons. France is not a foreign country in that area as it has its territories there, such as Mayotte and Réunion islands, the Antarctic Territories in the Indian Ocean, and in the Pacific, among others, New Caledonia and French Polynesia. French Indo-Pacific territories are inhabited by approximately 1.5 million people. France also has extensive Exclusive Economic Zones there – 9 million square kilometers.[ii] It is also worth remembering that France is both a nuclear power and a permanent member of the UN Security Council, which also contributes to the country’s readiness to take on greater responsibility and activity in the international arena. [iii]

The center of the world has shifted towards the Indo-Pacific and French defense concepts take this into account. The 2017 French Defense and National Security Strategy clearly shows the growing importance of this region both for France itself and for international security. This was further highlighted in the 2019 political report “France and Security in the Indo-Pacific” published by the French Ministry of Defense. [iv]

French policies in the Indo-Pacific reflect the crisis of multilateralism on a global scale, which has been noticeable for more or less a decade, and the return of power politics and strategic competition. That phenomenon is very visible in Southeast and East Asia. Since 2012, when President Xi Jinping came to power in China, Beijing’s global strategy, and in particular, the regional one, have been reevaluated and radically changed. Beijing’s new, remarkable assertiveness in the South China Sea significantly affects both the balance of power, alliances and the stability of the region through which passes more than a third of global trade. Another important factor of destabilization is still North Korea, whose domestic and foreign policy, and ballistic missile tests are a constant challenge to regional security. Other important issues that necessitate greater regional involvement of Paris are terrorism, which has intensified in the region in the aftermath of the war with the so-called Islamic State in Syria and Iraq (ISIL/ Daesh), as well as an endemic piracy, persistent especially in the Strait of Malacca. Fight against illegal fishing and drug smuggling are also critical issues where Paris plays a serious and active part. All the regional problems have been only exacerbated by the climate change, which largely affects the Indo-Pacific and the Antarctic areas. It is worth noting that as part of its commitment to the Indo-Pacific – including environmental and climate change issues – France joined the Indian Ocean Rim Association (IORA) in 2020 as its 23rd member. [v]

France’s Involvement in the Indo -Pacific

France’s involvement in the Indo-Pacific is multidimensional. Paris cooperates closely with the Association of Southeast Asian Nations (ASEAN), with particular stress on ADMM + – the platform of defense ministers of ASEAN – and a number of other countries, including such powers as India, China and Russia. [vi]

Paris is party to the UNCLOS (United Nations Convention on the Law of the Sea) treaty and works to uphold the principle of freedom of the seas through “Freedom of navigation” operations. This is strongly in line with American strategies in this respect.  In practical terms, it means French patrols operate on a regular basis in the South China Sea. Its most recent patrol deployment of navy ships took place in early February 2021 as part of the “Marianne” mission. It started in September 2020, and covered a distance of 15,000 km from the home ports of France. Its purpose was to patrol the Indo-Pacific basin. Particularly striking for China and the countries of the region was the fact that the French nuclear-powered submarine SNA Emeraude took part in the patrol. This was not the first French navy mission in waters whose sovereignty is being claimed by Beijing. In April 2019, the French surveillance frigate Vendémiaire passed through the Taiwan Strait, causing Beijing’s outrage.[vii] 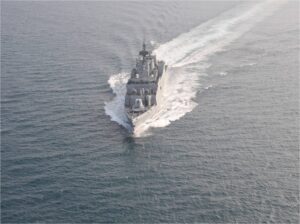 The French authorities explained at the time that the French fleet crosses the strait at least once a year, and that this had not previously been negatively perceived by the Chinese authorities. Paris made clear that France would remain committed to defending the freedom of navigation in accordance with the law of the sea. This is, of course, also proof of real cooperation for such countries – France’s partners in the region, as India, Japan or Australia, which are concerned with Beijing’s increasingly assertive actions in the seas of the region. France did not stop at the aforementioned mission in the South China Sea. An important signal both for partners and allies, as well as for China was also the “Joanne d’Arc” mission, operating in the area reaching as far as Japan. In early April 2021, as part of that mission, the international military exercise “La Perouse” took place in the Bay of Bengal, in which the navies of the Quad bloc of India, the United States, Australia and Japan participated under the command of Paris. It is designed to help ensure the security and stability of the Indo-Pacific region. French annual Jeanne d’Arc mission aims to improve cooperation with partners in maritime surveillance, maritime interception and air operations.[viii] With India, which is Paris’ strategic partner in the region, France holds “Shakti”, “Varuna” and “Garuda” exercises, including navy, army and air forces. [ix]As regards its cooperation with India, France as the world’s fourth largest arms exporter is a critical partner for New Delhi, as also for other regional allies: Australia, Singapore and Malaysia. [x]

A Need of a New security Architecture for the Indo – Pacific

France has always been an Indo-Pacific power. However, in the recent decade, Paris was forced to re-examine its strategy towards that region challenged by a visible, tremendous growth of importance of the Indo-Pacific in military, economic, and technological terms. The centre of the world has shifted there and it has been also reflected by the French foreign and security policies. The rise of China and its very assertiveness in the Indo-Pacific has helped strengthening strategic cooperation between Paris and the regional allies – India, Japan, Australia and United States, among others. This process is to continue as there is a real need to redesign and build anew the security architecture for a free and open Indo-Pacific. France will take part in this effort.

[iii] France and Security in the Indo-Pacific, French Ministry for the Armed Forces, 2019, www.defence.gouv.fr

[ix] France and Security in the Indo-Pacific, French Ministry for the Armed Forces, 2019, www.defence.gouv.fr