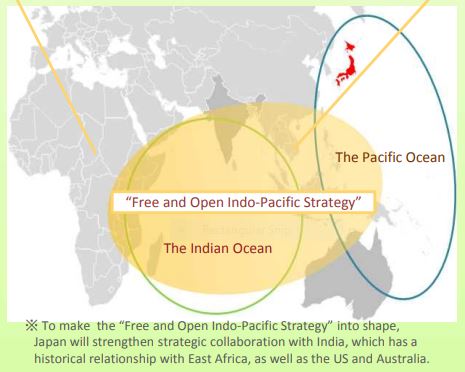 Leaving behind the debate on assigning credits to the person who coined the Free and Open Indo-Pacific (FOIP) strategy, there is no doubt that the strategy is now incorporated as an official policy of Japan and the United States (US). This article aims to situate the foreign policies of Japan and the US in the Indo-Pacific and understand the ways in which the geopolitics of the region impinge upon the sustainability of this strategy.

Development of the Idea of FOIP

In his address to Indian Parliament in 2007, Prime Minister Shinzo Abe spoke about the “confluence of the two seas”- from the edge of the Pacific Ocean to the edge of the Indian Ocean forming an “arc of freedom and prosperity”. Ushering in the prospects of an intensified foreign policy and proactive involvement in global affairs, in 2016, Abe floated the concept of a “Free and Open Indo-Pacific”. By establishing trans-border connectivity corridors, FOIP is a clarion call to connect the Asian and African continents and the Indian and Pacific Oceans. The overall aim is to maintain and strengthen a free and open maritime order based on the rule of law across the Indo-Pacific region.

By advocating the Free and Open Indo-Pacific (FOIP), Japan has stressed upon ensuring the safety and strengths of a rules-based international order, along with the importance of international laws to prevent instability, conflict, disruption or any one country’s dominance in the maritime domain of the Indo-Pacific region.

The United States has affirmed the FOIP policy. According to the US President Donald Trump, the FOIP strategy is important because the Indo-Pacific region is of economic and strategic significance for the US to invest in. In fact, its treaty allies and strategic partners in Southeast Asia- the Philippines, Thailand, Vietnam, Singapore, and Indonesia have also been strengthening their ties with other US allies and partners in the region especially Japan, Australia, and India. This US vision for the Indo-Pacific in terms of the FOIP strategy can also be seen as complementing the strategies highlighting the increased role of Southeast Asia, including Japan’s Indo-Pacific Strategy, Australia’s Foreign Policy White Paper, India’s Act East Policy, and Taiwan’s New Southbound Policy.

It was in the simultaneous perusal of the FOIP policy that the US pushed for the implementation of the Diamond Strategic Alliance structure and the consequent revival of Quadrilateral Security Dialogue, or Quad. It is quietly opposed to China’s continued militarization of and attempts to control strategic waterways throughout the region, namely the South China Sea. The common value of democracy that binds the Quad (US, Australia, Japan, and India) is also reflected in their high-level linkages and intelligence-sharing.

Japan and the US are committed to developing energy, infrastructure, and digital connectivity in the region. Under the ambit of Japan-US Strategic Energy Partnership (JUSEP), launched in October 2017, both the countries have sought to “facilitate nuclear energy cooperation, high-standard investment in projects to supply liquefied natural gas (LNG) or build LNG infrastructure by aligning the Japanese government’s target of USD 10 billion in public and private investment and capacity building training with the US’ Asia Enhancing Development and Growth through Energy” (Asia EDGE) initiative. Under JUSEP, open and competitive energy markets would be promoted, which would simultaneously bolster business partnerships and attain the integration of the regional energy sector in the Indo-Pacific. The third JUSEP meeting was held in Washington in February 2019. The US and Japan conducted the first trilateral LNG workshop in Jakarta on March 5, 2019, to assist Indonesia to develop its LNG infrastructure and promote energy partnerships in a free, open Indo-Pacific.

In fact, the Japanese and American private companies have begun cooperating on specific projects in the Indo-Pacific region, which includes: the Jawa-1 Gas-to-Power Project in Indonesia; the LNG to Power project in Bangladesh, and; the Japan-Guam-Australia Fiber-Optic Submarine Cable System Project.
On November 12, 2018, the Japan Bank for International Cooperation (JBIC), the US’ Overseas Private Investment Corporation (OPIC), and Australia’s Department of Foreign Affairs and Trade (DFAT) and Export Finance and Insurance Corporation (EFIC) signed an MoU to catalyze Indo-Pacific investment projects that produce quality infrastructure, increase connectivity, and promote sustainable economic growth in third countries. The idea of promotion of infrastructure investment, training programs and promotion of international best practices for public procurement in these countries of the Indo-Pacific region is rooted in principles of transparency, market-based financing, open infrastructure, and debt sustainability.

It is understood that FOIP prepares Japan to deal with the fast-growing Chinese footprint in the region through its Belt and Roads Initiative, which pose a challenge to the energy lane that sustains the Japanese economy.

Overall, the FOIP re-presents the conceptual map of some of the most strategically significant parts of the world, where the economic and security connections throughout the Indian and Pacific Oceans are set to create a single strategic system- grounded on values of peace and stability.

Further, despite their emphasis on the Indo-Pacific concept, Japan, India, Australia, and the US do not seem to share the same level of strategic convergences and military capabilities in the Indian Ocean. Nonetheless, a strengthened US-India and Japan-India relationship could stand as a formidable force in handling the emergence of a China-centric Asia.

The recently concluded High-Level Dialogue on Indo-Pacific Cooperation in Jakarta in late March 2019 highlighted the need to advance practical cooperation on maritime security, the Sustainable Development Goals, and infrastructure and connectivity, while simultaneously enhancing security, stability, and prosperity for all countries.

*** The Author is the CEO and Editorial Director of a New Delhi based think tank- Impact and Policy Research Institute (IMPRI). She holds a Ph.D. in American Studies from the School of International Studies, Jawaharlal Nehru University and was a Fulbright Scholar at Ohio State University, USA. She can be reached at simi@impriindia.org ***