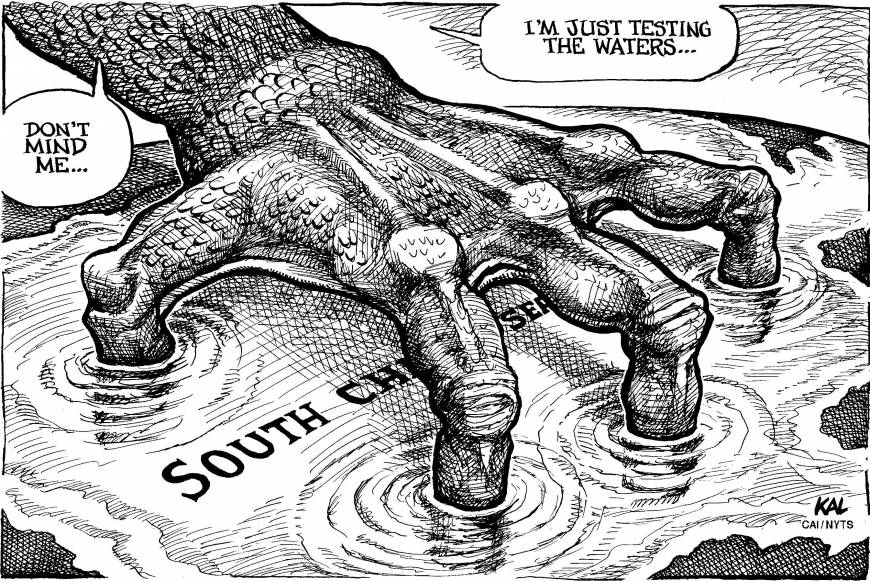 The French understanding of developments in the Indo-Pacific suggests that a “global confrontation” is likely in the Indo-Pacific region. Currently, the major global and regional powers, such as the United States, Japan, India and Australia are part of a Quadrilateral Dialogue (QUAD) and are unlikely to fight among themselves. Russia has no major presence in this region and nor is Britain. France has no conflict of interest with the US, Japan, Australia or India. What does then it signify when the French Defence Minister at the Shangri La Dialogue in Singapore recently expressed the view about a potential “global conflict” in the Indo-Pacific region?

Did this view hint at China’s aggressive activities in the Indo-Pacific region? Probably yes. Actually, the most recent and frequent talk in the town is China’s growing influence in the Indo-Pacific region gained through an economic practice that is perceived as “predatory.” China’s building of military facilities in the contested islands of South China Sea where about five trillion dollars worth of world trade cross annually and the inability of smaller neighbours to resist Chinese activities are yet another point of concern. Third is Chinese foray into the Indian Ocean through building of naval bases and other facilities that can be converted into naval facilities later.

But then who is going to confront China? Is it going to be a concerted effort by other major powers to check the Chinese Jaggernaut on march to displace other powers from this region? Until recently, the United States frequently stated that it has had no “containment strategy” to limit China’s growing power. India has abandoned non-alignment, yet it has also openly opposed any kind of “containment” of China. Japan, France, Australia, South Korea and many other countries have established deeper economic ties with China.

When Donald Trump has not cared to maintain cordial ties with allies and strategic partners, can there be a concert of powers to tackle the Chinese challenge? True, Trump has literally waged an economic war against China, but it has gone on the economic offensive against friendly countries as well. The situation is such that no influential country would feel comfortable to be with the United States against China and none would be interested in teaming of with China against the United States.

What the world has been witnessing in recent years is a subtle Cold Confrontation between the United States and China. The United States is apprehensive about spread of Chinese political influence and economic power that is perceived as a force that may erode the US predominance in global affairs. And China, with its enormous economic muscle, aspires to change the US-created world order to protect its economic interests in various parts of the world.

While China has attempted to establish its economic foothold in America’s backyard in Latin America, the United States seems to be attempting to confront China in its neighbourhood in the Indo-Pacific region. China is an emerging player and its venture in Latin America is relatively new, but the United States has been predominant power in China’s courtyard since the post-second World War era. The additional rationale for the US to further fortify its position in Indo-Pacific is to prevent the perceived Chinese dream of setting up a new informal empire to the exclusion of the traditional US influence in the region.

Countries in the Indo-Pacific have no appetite for Sino-US Cold Confrontation. The trade war between the United States and China has already affected third countries. Secondly, China’s aggressive postures in South China Sea and its

“predatory” economic tie-ups with weaker countries have generated fears and reduced China’s soft power. Simultaneously, US President Donald Trump’s unilateral decisions and undermining leaders and people of other countries have also not gone down well in neutral as well as friendly countries.

India is as much concerned over Trump’s policy towards Russia and Iran as China’s policy towards Pakistan and unacceptable activities along the Sino-Indian border. India will surely stay off any Sino-US rivalry in the larger Indo-Pacific region, unless India’s stakes are high in certain areas or over certain issues. While India is part of the QUAD, it is also part of Russia-China-India Triangular Dialogue forum.

India must work towards a free, open and inclusive Indo-Pacific where confrontations are kept to the minimum and opportunities are leveraged for cooperation and mutual economic growth. France has justifiably interests in the Indo-Pacific region and is certainly welcome to the region. If the French Defence Ministry perceives that ‘global confrontation” is likely in the Indo-Pacific, India and France must work together to prevent it. It is also worth contemplating whether it would be useful to rope in France to the QUAD and make a Pentagon of interested powers that would be seeking preservation of rule of law and respect for international law in the region.