Junta and the New Narrative of Myanmar-ASEAN Relations 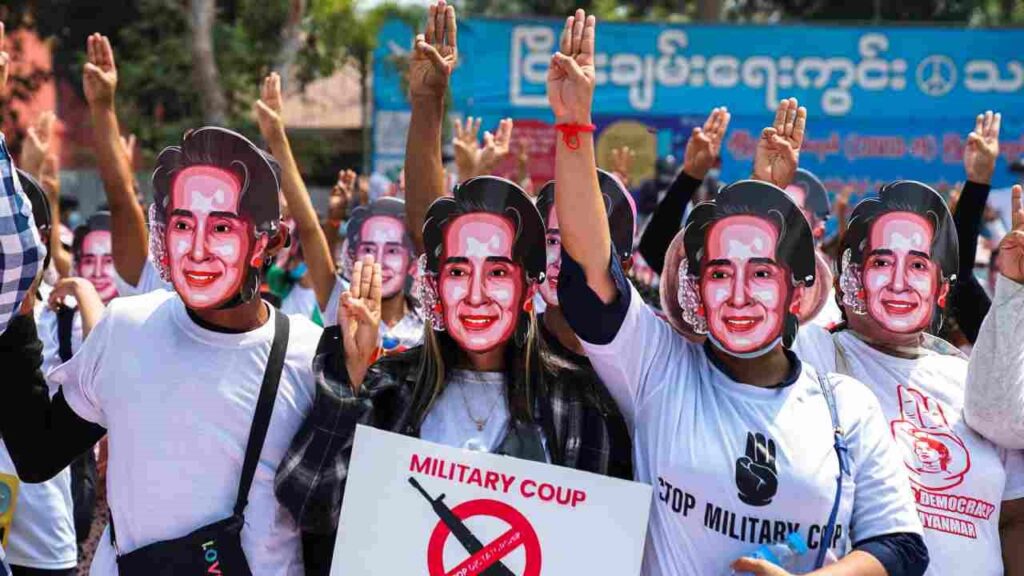 The most significant development in Southeast Asia at the dawn of this year was the coup d’état in Myanmar, where the popular mandate was brutally replaced by the military junta. The history of Myanmar has witnessed several coups right from its independence in 1948. On 1 February 2021, the military (Tatmadaw) took over administrative control in Myanmar by arresting the State Counsellor, Aung Sann Su Kyi and the President Win Myint on the allegations of influencing the procedure of election and violating the natural disaster law of the country. Due to the sudden political upheaval in the country, Myanmar’s relationship with the ASEAN (Association of South East Asian Nations) took a new dimension both internally and externally. The article intends to assess the Myanmar- ASEAN relationship amidst of the coup d’état in the country and what are the responses that are being coming up from the ASEAN as a whole.

Many political activists across the world viewed the coup of 1 February as the murder of democracy in Myanmar. After the civilian government was removed in the form of coup d’état, violent protests and demonstration started across the country. As a result of this, almost 40,000 people became homeless, casualties from both the sides, that is, people who were demonstrating as well as the military personnel. On February 25, 2021, Indonesian Foreign Minister Retno Marsudi appealed to the people of Myanmar not to resort violence in order to place their concerns over the political situation and not to disrupt the law and order situation in the country. In the early week of June 2021, the Foreign Minister of Indonesia urged the ASEAN to send Special Envoy to Myanmar in order to talk to all parties and to bring back peace in the country. The Special Envoy is coming to Myanmar under the Chairmanship of Brunei’s 2nd Foreign Minister, Erywan Yusof and Secretary General of ASEAN, Lim Jock Hoi. The Envoy was intended to give a complete report on the ground reality in the country and restore peace in the region. It has been further noticed that there is a delay in the process of the visit due to process of nomination in the Envoy. This political crisis in Myanmar created divergence of opinions among the different countries, as it has been seen that countries such as Indonesia are of the view that there should be re-election in the country in order to dilute the current crisis. The people who are demonstrating on the streets across Myanmar are strongly against re-election and demanding the NLD (National League for Democracy) to take charge of the country’s administration.

The visit of Senior General Min Aung Hlaing at the ASEAN Summit in Jakarta in the month of April sparked a new controversy on the intent of the ASEAN in order to restore peace in Myanmar and to uphold the views of the people who are demonstrating on the streets. In order to come to a constructive position to stabilize the conflict between the Junta and the people in demonstration, ASEAN brought about a Five Point Consensus. Unfortunately, the Junta is reluctant to consider the Five Point Consensus and seems to be intending to consider it only after there is stability in the country. In the first week of June, 2021, 80 soldiers were killed in the Kayah state near the Thailand border. The spill over effect of violence that is taking place in Myanmar is impacting the entire Southeast Asian region. The violence in Myanmar has put ASEAN in a challenging state and the entire world in looking after commitment and capability of the association.

The major factor that has been impacting the political narrative of Myanmar in the current time are the global responses and the divergent viewpoints of countries on what has happened in the country. The United States of America and United Kingdom has already imposed suspension on commercial relations and sanction on military sales. On the other hand, Russia and China refrained from commenting on the political turmoil in Myanmar and tagged it as major reshuffling in the government in the country by the Chinese authority. In terms of safeguarding the democratic spirit of Myanmar, opposition parties and ethnic groups formed the National Unity Government in the country which is a shadow government running in the country. In terms of India’s response in viewing the coup in Myanmar, it did not respond vehemently in this context that was criticised by many forums of media in the country. However, it subtly condemns the violence that is being carried out on the people who are protesting the coup and demanding to return the democratic spirit in the country. In this context, the European Union has put severe sanctions on Myanmar in viewing the coup and the violence in the aftermath.

The people of Myanmar under the current political turmoil are urging the ASEAN countries to take steps in order to re-establish the democratically elected government in the country. The United Nations Secretary General has extended his concern regarding the political crisis in Myanmar and has appealed for tough global response. However, it has been seen that in the ASEAN Summit to which the unpopular Junta leader was invited, invited criticism for the association. The Special Envoy sent by ASEAN and Five Point Consensus until now has hardly benefitted the people of Myanmar in their protest. It is essential for the policy makers and administrations of different countries both within the region and outside to step up the efforts to restore peace and tranquillity in the country.

Disclaimer: The Views in the Article are of the Author