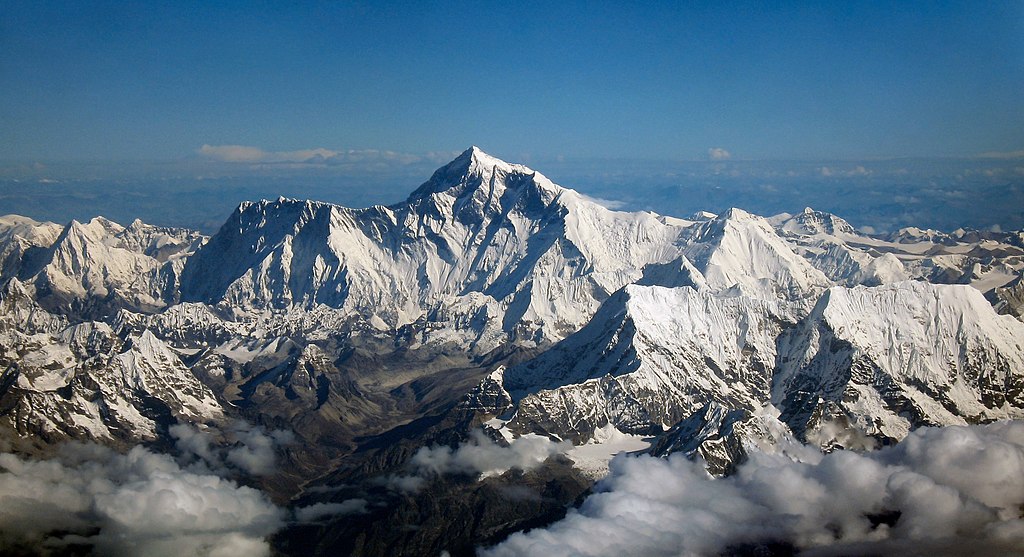 (Mount Everest as seen from an aircraft from airline company Drukair in Bhutan. The aircraft is south of the mountains, facing north. Image Courtesy : Wikimedia Commons)

Traditional Knowledge Systems (TKS), once regarded as old-fashioned and outdated are fast regaining traction. True knowledge has no life span. Its relevance is eternal.

TKS in the Himalayan Region teaches us the methods and applications that can help the globe sustain its developmental activities in myriad of fields. The Himalayan region represents a diverse social, cultural and environmental entity covering fully or partially eight countries in Southern Asia viz., Afghanistan, Bangladesh, Bhutan, China, India, Myanmar, Nepal and Pakistan. The North-western Himalaya in particular is widely recognized for its unique products like almonds, apples, apricots, chilgoza, saffron, walnuts and pashmina; and the North-eastern Himalaya is famous for areca nut, a variety of bamboo products, betel leaves, broom grass, large cardamom, pine apples and its semi-domesticated animal Mithun.

For survival, every ancient human society made efforts to understand its immediate environment and natural processes. In a way, it constituted the beginning of building up of distinct knowledge diverse societies under varied environmental conditions. Over a period of time, traditional knowledge got enriched and refined in a body of sophisticated local knowledge and practices, and was passed on from generation to generation.

Evidences amply prove that majority of the elements of natural capital are neither inexhaustible nor all of them could be replaced through technological means. Thus, human societies will have to depend on traditional knowledge for maintaining the sustainable supply of natural goods and services. The key features of TKS are: a) it evolved through adaptive processes at slow pace, b) it has defined geographical boundaries of influence, c) it occasionally encompasses scientific and other knowledge gained from outside, and) it is prescribed through moral and religious belief system and practices.

Traditional Knowledge Systems (TKS) regained its significance again in the wake of new researches and political recognition of indigenous rights with the adoption of Agenda 21 during UN Conference on Environment and Development (UNCED) held in Rio de Janeiro in 1992. The Convention on Biological Diversity (CBD) for the first time established international protocols for protection and sharing of national biological resources, specifically addressing issues of traditional knowledge. Nagoya Protocols (2010) provides a legal framework for the effective implementation of the relevant objectives of the CBD.

Many of the traditional knowledge based practices have been supporting local communities in earning livelihood. This demonstrates the tapped as well as still untapped potential of the local knowledge systems. As long as the TKS of local communities remain intact, starvation would remain alien in the IHR.

Across IHR women play a crucial role in interlinked subsystems, such as managing crop husbandry, animal husbandry, forest resources and defining features of the rural subsistence economy. There exist a number of traditional institutions, which ensure sustainable management of natural resource by using traditional knowledge systems. However, in recent times merging of local subsistence economy with mainstream market economy, acculturation, loss of local dialect, life style change and outmigration of young people along with changes in policies, institutions, technology etc. are accentuating biophysical and social vulnerabilities in the IHR.

Hence it is only sensible to learn from the TKS before these are lost under the onslaught of modernity. Many features of Traditional Ecological Knowledge (TEK) are well accepted by scientists in the field of agriculture, forestry, healthcare, irrigation, architecture, ethno-biology, soil and water conservation, folk forecasting of weather, climate change adaptation, and disaster risk reduction. Placing TEK at the centre of environmental governance would help expand the range of sustainable developmental options and co-production of knowledge base.

*** The author is a professor in School of Environmental Sciences and Rector II at Jawaharlal Nehru University, New Delhi ***