Blow to democracy in Myanmar 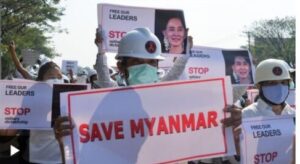 The military coup in Myanmar orchestrated by the military junta led General Min Aung Hlaing; the Commander in chief of Myanmar defence forces was a serious blow to nascent democracy in the country that was ruled by the military for the major of its independent history. The country became independent in 1948, a year after India but Myanmar has had autocratic military rule for 53 years from 1962 to 2011.

On 1 February 2021, the world woke up to the military taking over Myanmar and the uncanny arrest of Aung San Suu Kyi, leader of National League for Democracy (NLD). Democratically elected NLD leader Suu Kyiwas heading for a show down despite her landslide victory in November 2020.  Tatmadaw; the military rulers are setting the new rules of governance in Myanmar. 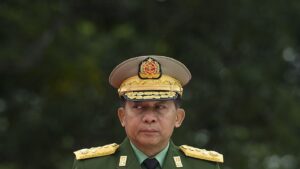 Myanmar citizens were awestruck and government employees, teachers, bankers, lawyers and even students took to streets to protest. Initially, the resistance was weak, fearing reprisals but got strong with all sections of society joining hands and international support lending assurances of hope. Resistance soon spread from the Capital to other main cities like Yangon. It was not as easy to go against the power of gun, but Burmese people did go against the tide of bullets.

General Hlaing was very curt and clear when he justified the military takeover and said that the military was with the population and that true and disciplined democracy will return to Myanmar.

United Nations General Secretary, Antonio Gutierrez called it a “serious blow to democratic reforms”. The United States and United Kingdom responded with sanctions on the military junta. The UN Security Council responded with a statement to condemn the attack. It was not a surprise to note that China blocked the UN Security Council statement. The UN, US and UK speaking in favour of democracy and majority of nations not approving the military junta’s undemocratic move did not go down well with the Chinese leadership. The Chinese leadership chose to express dislike against voice of majority through quiet pursuance of its long-term policy in Myanmar; and made only a lame diplomatic statement asking Gen Hlaing to release Suu Kyi. What a diplomacy of contradiction!

Acceptance of democracy in Myanmar, which is also India’s neighbour, and any step towards a democratic Myanmar getting out of China’s grip was a difficult proposition for Beijing. Why did China instigate and support the military junta when democracy was all set to take roots? The coup appears to have been designed when democratically elected NLD was to go into session the next day.  Was the coup affected to keep military commanders in power or there is a bigger game?  Chinese premier Xi Jinping had visited Myanmar in January 2021 when 33 bilateral agreements were signed. Within two months a coup against the same government and military junta being pushed again to the undisputed centre of power may be a move to execute all the agreements and MoUs. Time will unravel the future of Myanmar’s history in due course. China-Myanmar Economic Corridor (CMEC) under the Chinese Belt and Road Initiative (BRI) in Myanmar aims to pump oil through pipe lines to Chinese Yunnan province. Similar Chinese intervention in Nepal and Bangladesh are challenges to Indian efforts to maintain peace in South Asia. Pakistan is already a Chinese stooge that is causing concerns to Indian decision makers due to China-Pakistan Economic Corridor (CPEC). It counters Indian move to strengthen relations with Myanmar and other neighbours.

Newly appointed military junta Foreign Minister Wanna Maung Lwin rushed to meet Prayuth Chan-ocha, Thailand’s Prime Minister only strengthens the argument of Chinese support to Tatmadaw; details of which remain allusive. US President Biden at this point of time is busy charting out a vison plan for the Indo- Pacific Region and is closely working with members of ASEAN; which is primarily to counter China. Will ASEAN members sign in; is doubtful. US-China relations are not at their best and will China abide by any of the US’s manoeuvres in the Indo-Pacific Region, is a difficult proposition. Chinese strategy of treating situation in Northern state of Myanmar like Uighurs on Sino-Pakistan borders is only a legal excuse to deploy it forces inside and control Myanmar militarily.

Way out for Myanmar

The situation is extremely complex to say the least. Suu Kyiis under arrest, population is out in open confronting the Tatmadaw. Killings have surged the emotions; China is not relenting; Democratic pressure from rest of the world has had no effect. The Swiss envoy Cristine Schraner Burgener is going through an ambiguous mist with no light in sight. None of the Myanmar neighbors are sound enough to impact the outcome.

Realizing the gravity of the situation and likely increase in violence, one option for General Hlaing is to stay strongly connected to the Dragon and draw his strength from The Red Army. It will be a strong step to thwart any attempt by any power to raise any objection. China is strong enough to provide strategic balance and economic support to Myanmar and military rule will gradually be established. Some more violence and killings will settle the score in favour of the military junta. The situation this time will be like previous rule of the military and the world will accept the power position, albeit with a grudge.

Alternate option available is to accept the voice of world democracies and the UN and revert the power to NLD. Let the party establish democratic government and Tatmadaw strengthens the country for growth and good of the people. That will release part pressure on China from the US in their pursuit to manage the Indo-Pacific Region. World will get respite from the strategic stress and economies will see a positive surge. But this will require courage for the ruling general to accept military power becoming an arm of the government rather than the government itself.

Third option is a combination of the above two options. General Hlaing should speak to the citizens, create an environment of trust, comfort and positivity. He should release Suu Kyi and help NLD in continuing the session. While the elected NLD forms the government, military should assist the government in establishing sound internal administration and organize itself to counter terrorists on its northern border. In due course of time, Tatmadaw may gradually ease the power in favour of democracy. He will be able to balance out threat of sanctions, Chinese dominance, and set the country on the path of economic growth.

There may be many more options and future will gradually unwind and in all probability in favour of the people of Myanmar. In either of the options, India has to remain vigilant and pursue her dreams of making South Asia as engine of growth.