Is the Game Over for the United States in Afghanistan?

Kalinga Institute of Indo-Pacific Studies - Scholars’ Point - Is the Game Over for the United States in Afghanistan? 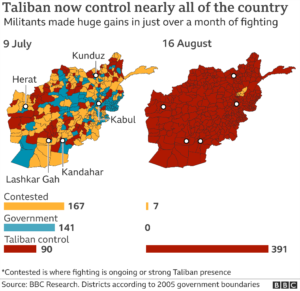 The United States’ forces with her allies landed in Afghanistan in 2001 after a “Joint Resolution” was signed in the US Congress and President George W Bush passed it as an authority to use force against the hidden enemy who attacked the United States.  The 9/11 Incident was the turning point in the history of the US when 2977 people were killed in a ghastly terrorist attack that was a new inclusion in their threat perception. The financial center of the United States, New York, was attacked with precision to dent the very effectiveness of the U.S. security apparatus. President Bush vowed to ‘win the war against terrorism’ and Operation Enduring Freedom was launched in Afghanistan. Her allies: Canada, Germany, France, UK and Australia promised to support. Initial offensives focused on eliminating the terrorists and ousting the Taliban regime were clear in intent.  Soon the steam of forces wavered and the operation that was to win the hearts and minds of Afghan population withered away. Twenty years of war against Taliban & terrorism by the United States could not accomplish the joint resolution to win the war.

Neither terrorism nor the terrorists could be eliminated from Afghanistan. All that they achieved was to provide arsenals and finances to both Pakistan and Afghanistan during the occupation; and this entire military hardware worth US $ 88 billion that has been left behind in Afghanistan has turned against the very cause of establishing peace and democracy in Afghanistan. The venture has failed and has been equated to withdrawal of US Forces from Vietnam. Nevertheless, the US has hailed this as a major victory and that the mission accomplished its objectives. This war has been disastrous to the mankind. The war killed coalition forces soldiers, Afghan people and Taliban fighters alike. Bullets did not discriminate one from another and in fact, the very purpose for which the US led forces with a UN mandate invaded Afghanistan does not seem to be there anymore. The terrorism continues, Taliban striking at will and it is a saga of death and destruction in Afghanistan. The early military victories that the US and the coalition forces achieved in Afghanistan, in recent times, gave way to a realization that the Taliban could not be defeated militarily and that negotiated reconciliation with the Taliban was the way forward.

Change of guard from Trump to Biden in the US has changed the priorities for operations in Afghanistan. The authorities decided to leave the war zone to bring about peace in the region. The US announcement and speed of preparations to leave Afghanistan was unprecedented. This was result of US Congress sessions in September 2020 and March 2021 and the decisions taken by Mr. Joe Biden, the US President. The lawmakers in US wrote a letter to the Secretary of Defense Lloyd Austin stating, “It is unconscionable that high-tech military equipment paid for by U.S. taxpayers has fallen into the hands of the Taliban and their terrorist allies.”

The Kabul airport that had become top of the line fighter operational base was vacated with no one taking over the operations. What is intriguing to the rest of the world is the way the US and other forces departed from Afghanistan.  Any military, worth its salt, departs from a country after termination of the mission with a ceremony where in the local government thanks the outgoing forces for their support. Some indicators of the state of Afghanistan and rule of US v/s Taliban that need to be studied are –

Hindsight view reveals that a collusion possibly was at play. Time is not far when collusion of the trio of Pakistan, China and Afghanistan will be out in open. China has already pledged US $ 31 million aid to Afghanistan. Dr Amjad Ayub Mirza, a human rights activist based in the UK says that Pakistan’s ISI chief has visited Afghanistan despite Gen Bajwa, the Pakistan Army Chief disapproving his plan to visit. Pakistan army is operating its troops to include commandos (2SSG Battalions), infantry units, artillery guns, engineers and signalers in Panjshir Valley, with Maj Gen Adil Rahmani leading this force. If reports are to be believed, several members of Pakistan’s elite forces have died fighting in Panjshir Valley. Assurances by Pakistan that Taliban will make a smooth take-over with absolute peace in the country reflects the true colours of their ties. They even claimed that a United front will emerge to stabilize the country. The role of Chinese CPC and Russian Federation is opening up and has become evident.  So yet again, the great game is on in Afghanistan. Post the US withdrawal, to what extent China’s influence will register in Afghanistan is a major question. Amidst all these chaos and concerns, the civil population has been at the receiving end. One has to wait and watch the extent to which the world powers deal with the Taliban regime and what will be its repercussions.

*The Author is an Indian Army veteran and writes on international relations and human behaviour.

Disclaimer: The Views expressed in the Article are of the Author