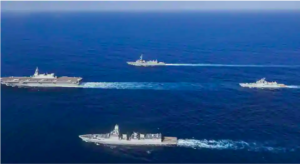 The Malabar exercise has been the flagship interoperability naval exercise between India, the US and Japan and has been the subject of much criticism from China. With Australia joining and making it a quadrilateral exercise, an unambiguous link has been drawn between the Malabar exercise and the Quadrilateral Security Initiative, also called the Quad.
The pronouncement of the Quad has perhaps been one of the most significant geopolitical developments in recent times and has given rise to a number of speculations and assessments pertaining to its future. While the grouping died a rather premature death in 2007, its rebirth in 2017 has been strongly supported by the political leadership in all the four member countries. The announcement to include Australia in the Malabar exercise this year attracted much attention, turning a new leaf in how the Quad is being perceived and how greater synergy is being built in the Quad, through greater military-to-military interoperability.
The Quad member countries have largely projected the grouping as being primarily consultative in nature, and limited mostly to the diplomatic machinery of the four like-minded countries, to evolve a free, open and inclusive Indo-Pacific. However, all the Quad countries joining to engage in highly sophisticated military-to-military drills lends a new meaning to the grouping and raises questions about how it will be perceived or misperceived in the coming times. Unlike China’s criticism of the Quad as an anti-China outfit and a US-led strategic move to contain China’s rise, the Quad countries contend that the grouping is focused on managing the strategic ramifications of China’s rise and on deterring China’s unilateral actions that pose threats to peace and stability in the Indo-Pacific.
The significance of Australia joining the recent exercise that took place in the Bay of Bengal and the Arabian Sea is extremely pertinent at a time when the notion of China’s peaceful rise stands exposed as nothing more than rhetoric. China is being perceived in recent times as a country that is systematically engaging in economic, diplomatic and military practices that are threatening the sovereign rights of many countries. China’s rise is increasingly seen as aggressive in intent and operation.
Australia, which was earlier viewed as a weak link in the Quad because of its close ties with China, has taken a bolder turn in its approach, in the wake of its differences with China over the latter’s mishandling of the coronavirus pandemic. Moreover, China’s intransigent behaviour along the India-China Line of Actual Control (LAC) and the confrontational turn in US-China relations lend a new context to the Malabar exercises, which aims to build habits of cooperation among the militaries of the Quad countries. Given the maritime orientation in China’s military modernization and strategy, its power projection in the Western Pacific and strategic inroads into the Indian Ocean region, the Malabar exercise has acquired a distinct focus on the geopolitics of the Indo-Pacific, where competition, cooperation, contestation and confrontation among great powers will play out in the future.
In view of China’s strategic ambitions and aggressive steps at the expense of peace and regional stability, a number of countries hitherto hesitant have shown more willingness to call out China’s recalcitrant behaviour, and join forces to create robust deterrence. The level of bilateral engagement between India and all the Quad members have grown in both substance and optics and have shed aside a number of historical hesitations to build a stronger alignment against unilateral activities in the Indo-Pacific region. For instance, the regular entry of Chinese submarines has made it imperative for India to cooperate with other like-minded countries to enhance its broader maritime domain awareness (MDA) and its anti-submarine warfare (ASW) capability.
Bilateral naval exercises between India and the US that has its genesis in the early part of the post-Cold War era, over the years, became trilateral with the inclusion Japan, and now has become quadrilateral by including Australia. The exercises have grown in sophistication and the level of interoperability. The United States no longer the power it once used to be is looking for regional partners in addition to its traditional allies to help sustain the security and financial order that is under challenge. On the other hand, India to realize its regional and global aspirations is recalibrating its partnership with the US and its allies like Australia and Japan. Such new directions in the foreign policy orientations of the Quad countries are evolving in the emerging milieu of the growing China challenge. The Malabar exercise 2020 reflects the new strategic equations developing in the Indo-Pacific and it will be worthwhile to watch how these new partnerships are recalibrated and operationalized by the Quad countries while reorienting their China policy.

**The author is a Senior Assistant Professor at the Department of Geopolitics and International Relations, Manipal Academy of Higher Education (MAHE), Manipal**