A line of hatred that raised a wall between the two brothers. 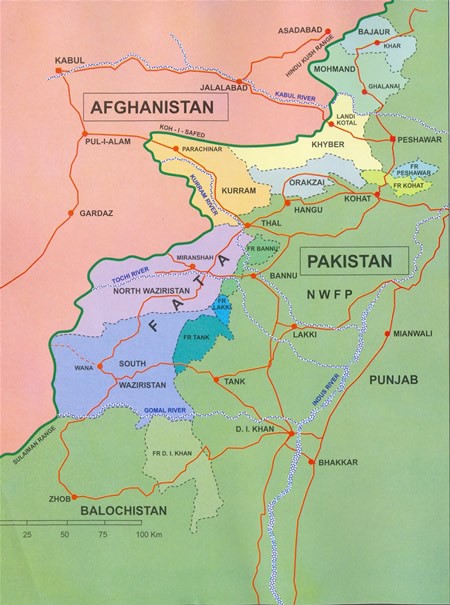 Killing is not human nature; it does not come easily to humans in a society. Irrationality takes over only when the survival of an individual or the race is threatened. Amygdala is the core organ in the human brain that protects an individual from a serious threat to his life. When the same threat appears against a race or a society; social amygdala takes over to protect the society. Hence all measures possible are initiated by members of the society in case of a dire threat to their race or society. Recent killings of Pakistani officers and men in North Waziristan and Shiite Muslims in Baluchistan has a psycho-social factor that has forced them to defy Pakistan Government and military policies. While rising against the establishment is an offense as per the constitution of Pakistan, but the threat to survival is a single vital factor that weighs over all other for the tribes residing in border areas of Pakistan. Even at the cost of being called terrorists, locals have vowed to fight their battle themselves. The war in Waziristan has been raging since 2002 and has continued unabated. Efforts by the government of Pakistan have proved only a temporary measure. Several rounds of negotiations have only aggravated the social pain.

There have been several incidents of killing of Pakistan armed forces personnel in the past, and the number is on the rise. Recent killings of three army officers and a Havaldar has brought in fresh focus on internal security in Pakistan. The counter-offensives by the Pakistani army too have been extremely harsh for the tribal people of Khyber Pakhtunkhwa, Baluchistan, and Gilgit-Baltistan.

Pakistan shares 2430 kilometers of borders with Afghanistan called Durand Line from Hindu Kush mountains to all along (established by British Government in 1893) entire western front of Pakistan. The demarcation has been contested by Afghanistan ever since its approval for the simple reason that it cuts through the tribal belts of Pashtuns and Balochis. Khyber Pakhtunkhwa (Erstwhile North West Frontier Province {NWFP}), Baluchistan and Gilgit-Baltistan have been divided that has separated families and relations. Hamid Karzai, the Afghan President, reiterated his stance in 2017 that the border was never recognized between the two countries.

Dominant groups like Pakistan Taliban have increased their anti-establishment activities to seek legitimate existence rights in the area. Local political parties and protesters are up against the army every now and then. On its part, the army has been conducting searches and raids in the region. The recent emergence of IED war by terrorists against the Pakistan army has taken the fight to a new level. The time is not far when modern technology will be leveraged in this fight. Pakistan, on its part, is already using its Air Force fighter aircraft and drones to target the people and places in the region. Constitutional approval of merging Tribal areas into Khyber Pakhtunkhwa has on one hand given protection to the tribal populace, while on the other hand, it has given a free hand to the military to carry out any offensive action against terrorists at will.

Such incidents reveal that the feeling of animosity and hatred among the tribal people in Waziristan and Baluchistan against the establishment of Pakistan is at its all-time high. The Pakistan army considers them as terrorists and undertakes the offensive against the people in a similar manner as British operation of yester years. Killings of local youth and detainment of leaders is common. North Waziristan has been dubbed as ‘terror hub’ by the US and all aid to Pakistan has been stopped by the US since 2001. The incidents involving IEDs by locals have been organized with precision, and such organized attacks can occur only when vengeance is at its highest, and the society is eager to take revenge. And these are not some of the lone wolf attacks; there are reasons to ever-increasing violence. Past atrocities on the tribal society have been heinous, full of hatred, devoid of any human love and affection, and what is the most painful aspect is the barbaric methods that have been used by an unrelenting Pakistani Armed Forces.

It must be realized by the Pakistan government that military action is no answer to Psycho-social problems of society, community, and tribe. While it is accepted that actions by the state are meant to protect people and property, it is unacceptable to kill Pashtuns and Balochis who are permanent residents and inhabitants in their areas since the pre-Christ era. Waging war against people who do not accept the sovereignty of the state and are devoid of their basic rights is once again no solution to the complex imbroglio.

At a time when Pakistani economy is dwindling, productivity is at a low ebb, the industry is close to standing still, and the army is a drain on the exchequer; is it imprudent to be in a hurry to complete border fencing and stand guard on the border outposts against its own people. The US has pulled its plug out of Pakistan till its terror network is destroyed and Pakistan joins the league of acceptable democratic norms. Are the people in power so deeply head-buried in the sand that they don’t see the demon knocking at their doors? Self-fulfilling prophesies will only take ego to the grave is a fact enunciated by mullahs, maulvis, and saints all along. And Pakistan is finding recourse in subduing people instead of supporting and developing them.

The social amygdala is at play, and Pakistan military and government must realize this to bring peace in the region.

*** The author is Brigadier in Indian Army and is serving as Group Commander, Group HQ NCC, Gorakhpur (UP) ***