The 2020 US Elections: Stakes for India 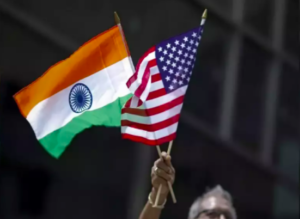 As the US Presidential election has approached, perhaps for the first time there is an unprecedented sense of India’s stakes in the US election. Both President Trump and Joe Biden seemed keen on engaging Indian American voters and gave equal focus on India as a foreign policy issue, in days leading to the election. While Trump wavered from criticising India and praising it, quintessential to his style, Biden made every attempt to prove his usefulness for the Indian American voters. The latter even wished Indians across the world on Ganesh Chaturthi and declared Kamala Harris as his Vice Presidential candidate, a woman of partial Indian descent. The Democrats and Republicans have made substantive attempts to capture the Indian diaspora vote by organising meetings, ads, and campaign materials in languages such as Hindi, Tamil, Telugu, and Gujarati to bolster their chances of bagging the Indian American vote.

The Indian diaspora in the US is one of the most successful expatriate communities. Indian-Americans are believed to be the second-largest immigrant group in the US. Indian-Americans constitute less than 1 per cent of registered voters. The Indian community is in the spotlight after Biden picked Senator Kamala Harris as his running mate. Harris is the daughter of an Indian immigrant. She is the first Black woman and Asian American in history to make the presidential ticket for a major party. A recent survey found 72 per cent of registered Indian American voters supported Biden for president. In comparison, only 22 per cent of Indian American voters, favour Trump. The remaining 6 per cent of voters chose “others” or said they did not intend to vote.

The 2020 US Presidential elections matters for India not just because the Indian American voters in the US is an ever-growing community having a significantly identifiable group behaviour in voting – overwhelming support for the Democrats; but also because US relationship is the most important of India’s bilateral ties, having assumed a different meaning recent due to India’s growing tension with Beijing. Both Joe Biden and Donald Trump have openly recognised the grave threat from China, and find political congruence with India. South Asia in general, and India in particular, has become a greater foreign policy priority for the United States. While India’s rising economic and strategic profile has helped the United States pivot towards India—because of the former’s free and open Indo-Pacific strategy—a shared apprehension vis-à-vis China has also proven critical to the United States’ engagement in Asia. At a broader level, the relationship with the US matters to India more than any other bilateral engagement: economically, politically and strategically. American Presidents can make a huge difference to bilateral ties, as well as global multilateral cooperation, including on trade, on immigration policies, and larger strategic issues.

The 2020 U.S. Presidential elections could prove a turning point in a number of ways with respect to the United States’ India policy. In the United States—perhaps for the first time—some Indian-American voters are turning away from the Democratic Party, traditionally their party of choice. Both presidential candidates—Donald Trump, who is seeking re-election as the Republican nominee, and Joe Biden, the opposing Democratic candidate—are pandering to the Indian-American vote base, which constitutes about 5 per cent (1.8 million) of the total American immigrant eligible voters.  Bipartisan outreach to Indian-American voters, and a consensus among both parties for continuing a strong relationship with India, augurs well for future U.S.-India relations.

In the larger debate regarding whether Trump or Biden proves more beneficial for India, the jury is still out. There may be a greater sense of political convergence between Trump and Modi, an already tested chemistry, despite the former’s unpredictability, which has taken the Indian government by surprise in the past. The United States’ open support for India during the ongoing border conflict with China, its tough stance on terrorism, the strengthening of bilateral and multilateral mechanisms (e.g. the 2+2 dialogue and the Quad), and economic, political, and strategic convergences in the Indo-Pacific, are likely to make Trump the current Indian government’s preferred candidate. Despite this, any open admission of support for one U.S. presidential candidate over the other from Indian government officials or any ruling party functionary is unlikely.

Regardless of who wins the U.S. Presidential election in November, political and strategic continuity in U.S.-India relations is likely. India’s relations with the United States are primarily predicated on stable domains, such as defence relations, increasing trade dependence, regional concerns vis-à-vis China, and a combined posture in the Indo-Pacific region. These are likely to continue under a Biden presidency as well. Biden is also perceived as close to India given his role under the Obama administration in improving ties with New Delhi. He also boasts close ties to the India Caucus members and those who helped secure congressional approval for the 2008 U.S.-India civil nuclear agreement.

The Trump administration’s relationship with India brings added meaning to the elevation of India as a major defence partner through a sustained supply of critical platforms in the defence sector, some of which were purchased during the early stages of the ongoing India’s border conflict with China. Regular diplomatic interaction at the highest levels between India and the United States through the 2+2 and the Quad forums ensured not only sharing best practices but also exchanges of joint regional responses during crises. At the regional level, the Indo-Pacific strategy has been a strong binder for U.S.-India ties, with an increasing promise of bilateral interoperability and regional cooperation.

Irrespective of who wins the US presidential race it is expected that India will continue to remain important for the US.

**The author is a Research Fellow at Indian Council of World Affairs, New Delhi. He is Assistant Professor, International Relations at the Netaji Institute for Asian Studies, Kolkata (en lien). He was a Fulbright-Nehru Doctoral Research Scholar at the Saltzman Institute of War & and Peace, School of International Public Affairs, Columbia University, New York for the academic year 2015-2016. **