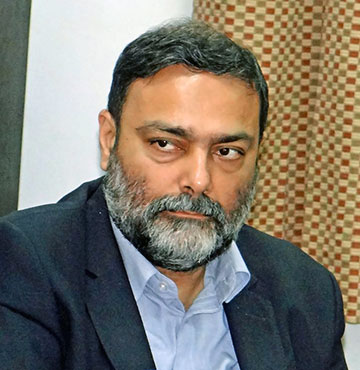 Varun Sahni is Professor in International Politics at Jawaharlal Nehru University, New Delhi and Chairperson, Centre for International Politics, Organization and Disarmament (CIPOD). He edits South Asian Survey, an international peer review journal of repute, speaks regularly (since 2006) at the National Defence College (NDC), New Delhi and has been Jury Member of the Jawaharlal Nehru Award for International Understanding. An Inlaks Scholar, he wrote his doctoral dissertation on the political role of the Argentine Navy at the University of Oxford (1991). Before joining the JNU faculty in 1995, Varun Sahni was Junior Research Fellow in Politics and Junior Dean at Lincoln College, Oxford; Resident Fellow of the Rajiv Gandhi Institute for Contemporary Studies, New Delhi and Reader in Latin American Politics at Goa University. He has been visiting professor/fellow at Sandia National Laboratories, Albuquerque, NM; Centro de Investigación y Docencia Económicas (CIDE), Mexico City; National Defense University, Washington, DC (2003, under the Fulbright Military Academies Initiative) and the Asia Pacific College of Diplomacy, The Australian National University, Canberra (2008). From December 2008 to January 2012, he served as the 10th Vice-Chancellor of the University of Jammu.

Professor Sahni has been “Personnalité d’Avenir” at the French Foreign Ministry (1995) and was a Member of Mexico’s Sistema Nacional de Investigadores (National System of Researchers) (1999-2002). He serves on the editorial boards of The Chinese Journal of International Politics(Oxford University Press), Asian Security Series, Stanford University Press, Contemporary Politics (Taylor & Francis), and International Studies Quarterly. He is Chairman of the Programme Committee of the Indian Council of World Affairs (ICWA), New Delhi and a Member of the FIST Advisory Board of the Department of Science and Technology, Government of India. For his ‘outstanding contribution to research and teaching’, he was conferred the VKRV Rao Prize in Social Sciences for 2006 by the Indian Council of Social Science Research.