Political Economy Strategies by the Communist Party of Vietnam: Many More Doi Moi Ahead

The Communist Party of Vietnam (CPV) will convene the thirteen National Congress from January 25 to February 2, 2021. According to the CPV’s draft resolutions issued in mid-2020 for public review, during 2021-2025, Vietnam will continue the cause of industrialization and modernization on the foundation of science and technology, innovation and creativeness, and the advancement of the fourth innovation revolution.

During the past five years, the Vietnamese economy has been constantly growing. GDP from 2016 to 2019 ranged from 6.21% to 7.08%, and the country continues the positive growth even during the Covid-19 pandemic (See the graph). By the end of 2020, Vietnamese Statistics Office announced GDP per capita of Vietnam as 3521 USD, while the IMF calculated the Purchasing Power Parity (PPP) per capital of Vietnam as over 10 thousand USD. Along with these economic momenta, the technological conditions have been well prepared for the implementation of the new strategy. As of December 2020, three major Vietnamese telecommunication corporations had launched the 5G service, which is available nationwide from 2021. Despite of the devastative storms, floods and landslides in 2020, Vietnam has been successfully maintained the social stability and responded effectively to the pandemic. As of 31 December 2020, the country had 1465 cases, of which, 1325 recovered, and the fatality number has remained 35 since autumn 2020. The country has invented its own anti-Covid-19 vaccines, which were in the pilot phases, with optimistic developments as of late 2020. 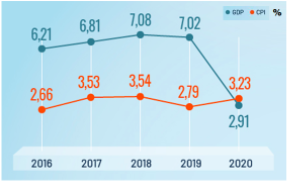 This is a giant leap compared to the Vietnamese economic status before Doi Moi or the economic reform. Vietnam gained independence in 1945 from the colonization of France and Japan. From 1945 to 1975, the country was going through the war against the French army (1946-1954), and the war against the American army (to 1975). After the reunion of the North and the South of Vietnam in 1975, the country still encountered conflicts along the northern border with the Chinese in 1979 and engaged in the fight against the Khmer Rouge regime in Cambodia in the 1980s. During the wars, when the majority of men joined the army, the rest of the population, mostly women and the elderly people joined the cooperatives, the typical business model of the centrally planned economy, which consolidated the solidarity among labourers.

However, CPV admitted that applying this war-time strategy for the post-war economy hindered socio-economic growth. During the early 1980s, the inflation rate was at three number digits; 80% of the population worked in the agricultural sector but the population relied on the food-stamp scheme. In the sixth National Congress of the CPV in 1986, Doi Moi policy (or the economic reform) was introduced, allowing the private sector to enter the economy. The swift change in economy strategy rescued the country from the edge of starvation and unlocked the potential of the population in doing business. From the 1990s, Vietnam has been the second biggest rice exporter to the world and remains the second biggest rice exporter during the on-going pandemic. The open-door policy encourages comprehensive and intensive integration in the global economy. Vietnam now is a full member of WTO, and as of mid-2020, has signed FTA with 13 partners, including FTA with Japan, CPTPP and Vietnam-EU EVFTA.

Over three decades of Doi Moi also witness many short-comings. The environmental problems have been increasingly severe. The laws on land ownership of the whole people reveal many mismatches with the market economy. The objective of becoming an industrialized and modernized country by 2020 now has been extended its deadline to 2030. The CPV has recognized these problems and will address such issues during its leadership. In the journey to the utmost goals of socialism “wealthy people, strong nation, equitable, democratic and socialized society”, the CPV has been adopted and adapted, changed from within and learnt from the outside for the sake of its people. This ability of continuous changing and learning enables the CPV to led the nation to the independence and freedom in the past, to the economic reform and development today. The nation and the world are waiting to the thirteen National Congress of the CPV, with a belief on many inspiring Doi Moi and reforms ahead, shaping Vietnam the role model of the transition to socialism for the people and by the people.

**The author is a lecturer of journalism and communication at Ho Chi Minh Academy of National Politics, Vietnam